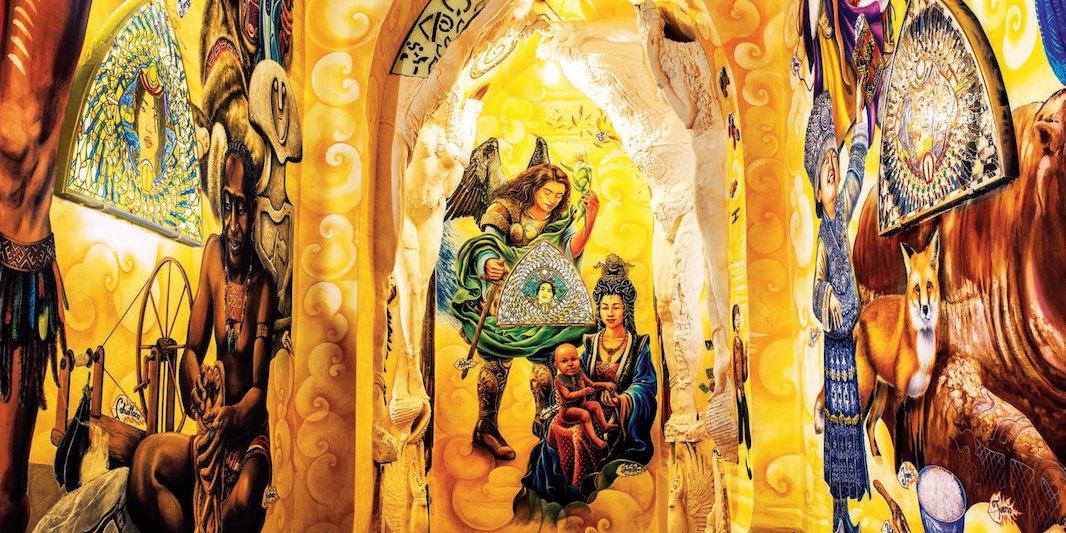 The Labyrinth – dedicated to the Divine Archetypes of all peoples and times, – is a hymn of respect for all spiritual philosophies and transcendent meanings of life. It is dedicated to a new, modern and visionary interpretation of the history of human myths and the power of connection with the archetypal realms.

It talks of a New Myth of the harmony among all Gods, to inspire a new era of understanding among peoples.

Walking along the Labyrinth is like journeying through the entire history of humanity, contacting the many facets of the eternal essence all peoples have always been yearning for, that source of universal energy beyond all cultural representations.

The Labyrinth is composed of five long naves with Gothic arches, connected by perpendicular corridors.

The art works in the two naves further to the left from the entrance have been recently completed: they are splendidly painted and enriched with sculptures and mosaics. The walls of the three older naves, on the contrary, are undergoing a first phase of restorations.

Discover more about the Hall

Discover more about the Hall

The Hall currently contains dozens of precious glass windows, each one dedicated to a different di-vine force, and many more gods and goddess are painted on the walls of the new Naves: they rep-resent receptacles of ideals and focuses of devotional attention from all civilizations and eras. Each Divine Force is represented anthropomorphically –– with the exception of Judaism and Islam ¬—, painted on glass in the central area of the window. All around, an exquisite mosaic of Tif-fany glass describes the attributes of the Force through the shapes of an archetypical ideogrammatic language. Tying together all the windows is the color yellow of the background: it is associated with Light, and it symbolizes the unity of all the Gods and Goddess in one great reservoir of spiritual energy.

Every divinity symbolically represents a philosophy, a culture’s way of interpreting reality and se-mantic perception, ordering it, via all the senses, into attributes and functions. Once the construction of this Hall is completed, many more peoples and times will be represented through the images of the divine archetypes connected to them.

Mirrors at the entrance, exit and sides of this Hall, point at the divinity inside each individual, that before becoming fully manifest can only be perceived as a fleeting reflection.

At the crossing points of the naves are large statues of men and women, representing the Guardians of the Labyrinth. The first two statues were sculpted from life in the Hall itself; the others were made with the use of moulds and then assembled at the corners of the corridors. Animals linked to the divinities represented in the windows and on the walls decorate the male and female figures of the Guardians.

The floor of the Labyrinth is completely covered in a very precious mosaic, which took over 15 years to make. The mosaic depicts flowers and fruit symbolically linked to the divinities represent-ed in the Glass Windows. This is to honor the role of Nature in sustaining our life on earth. In the crossing points of the Naves, there are mosaic portraits of Damanhur’s founders and animal chimeras that indicate with their eyes the direction of the Labyrinth.

The walls of the central nave are completely painted, illustrating the evolution of civilizations. Discoveries, cultures, inventions, invasions, revolutions and wars: these images present the difficult path of civilization, starting from the loss of a previous, mythical and very advanced civilization. In the beginning, as humanity moved its first steps toward a new evolution, the masculine and the feminine principles were in harmony, but as epochs went by the balance got lost. We got more and more lost in specialization and fragmentation, abstractions and separation. We lost balance in our thoughts, our feelings, our brain and moving further and further away from happiness and consciousness. Many crucial events of recorded history are painted on these walls. These images serve as a memory, a warning and a propitiation for future choices that may lead us toward a re-spect for cultures and diversity, harmony, peace, and the evolution of humankind.

Close
THE RESTORATION OF THE LABYRINTH