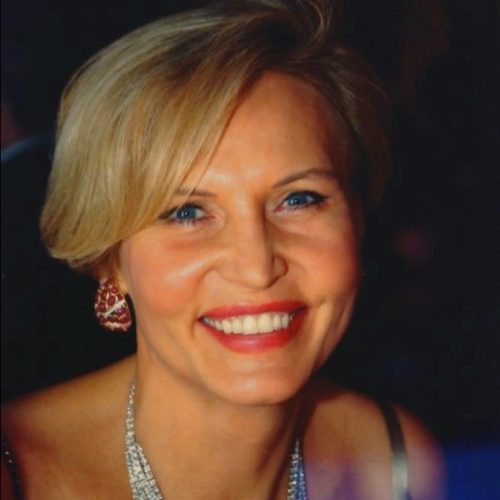 Born  in Kazakistan, at the time a state of the former USSR, daughter of a Polish Earl, Irina was raised in Slavic culture. She learned to compose music and write poetry. She pursued studies in physics and mathematics, and later graduated in Economics at Moscow University.  She then obtained her MA at Moscow’s School of Journalism. She also decided to learn Italian by herself, and she fell in love with Italy and its culture.

In 1990 she moved to Sicily, to work as a teacher and interpreter for the Italia-Russia Association. Her Italian improved, so much so that she became a presenter in the TV show “Hello Sicily” for the local broadcaster TeleSicilia Color. She also started modeling for several fashion brands.

In 1995, Irina moved to Rome to work for the Grand Hotel Ritz, and after the opening of the Russian markets she worked as an intermediary in fashion. In 2000, together with her Italian husband she founded  “IFD – International Fashion Diffusion”.  IFD is the exclusive distributor/agent of several prestigious European brands, and it was the first company to exclusively manage luxury brands in such a huge market.

After the birth of her daughter in 2007, Irina developed a great interest for spirituality that led her to devote herself to her inner growth. She started practicing Yoga daily and studied the sacred Indian Vedic texts. She has completed her second degree Reiki activation. At the same time, the love for the arts of her younger years was rekindled and she attended the School of Arts at Sotheby’s Institute, while organizing art tours for children and adults in the Principality of Monaco, where she had lived for about five years. Now she lives in Switzerland with her family.

Irina is very passionate about traveling, and loves discovering the most hidden areas of our planet and getting in touch with different cultures. She has traveled all around the world and fell so much in love with Latin America that she bought a home in Natal, in the Rio Grande do Norte Region of Brazil. This gave her the opportunity to get acquainted with the culture of the Amazonian Shamans.

In 2015 she went to Damanhur for the first time, and discovered she feels a special attraction for its citizens, their ideas and lifestyle.